Have you ever found yourself frustrated because it seems like God’s not speaking to you? I know. It’s hard. But I’m so challenged by this thought from my friend, Jeff Goins… What if God is already speaking, but we just aren’t in tune with His voice? Jeff is guest posting more about this on the blog today. Take it away, Jeff…

I don’t know about you, but I wish God would just speak to me. Oh, I know. He speaks through Scripture and community and as a still small voice in my soul. I get that. But sometimes I just wish the clouds would part, a shining light would drop down from the heavens, and the booming voice of the Almighty would speak.

Is that too much to ask?

I’m sure I’m not the only one who wishes for these things. But I wonder if God did speak to us, if He called us in the way that we expected, if we would really listen. In fact, I have good reason to believe that we wouldn’t.

Three thousand years ago, four or five miles northwest of Jerusalem in the hill country of Ephraim, there was a small town called Ramah, where a man named Elkanah lived. He had two wives, one who was infertile and the other who reminded her of this constantly.

Once during a trip to the ancient city of Shiloh, the barren wife Hannah was so plagued with shame that she made a public vow. If she would become pregnant, she would give her son to the high priest, dedicating his life to religious service. Shortly after, she conceived a son and named him Samuel. As soon as he was weaned, he was sent to Shiloh to serve the priest Eli.

Samuel was a special boy, a gift to his parents who long awaited his birth and a gift to Eli who only had disobedient sons. He served the priest in the work that he did, and the older man groomed him for a promising future.

One night, after months if not years of service, Samuel awoke before dawn. Startling awake, he sat up in bed and looked around.

He swore he’d heard somebody whispering his name. But no one was there. Settling back into bed, the boy fell asleep only to be awakened again a few seconds later. This time, he was sure; it was a voice.

“Here I am!” he shouted back. No answer. Running into Eli’s room, he shouted, “Here I am; you called me.”

Eli rose out of bed, squinting his eyes, which were beginning to fail him.

Samuel was confused as well, but he did not want to argue with his master. So he returned to his room and slowly laid his head back down. He forced his eyes shut, too anxious to sleep. For what seemed like hours but in reality was only a few minutes, Samuel lay in bed. Then as his eyelids began to grow heavy, he heard it again, just as quiet as before but persistent as ever.

He shot up in bed, his heart racing. He called his master while once again rushing into Eli’s room. Again, the two were equally confused.

But before Samuel could even put his head down on the pillow, he heard the voice again, even louder than before. He got up again and called to Eli, his voice quivering with fear.
        
But the master’s response was different this time. He told the boy to stop calling and instead to listen, giving him six words to say. So Samuel returned to bed and listened. When he heard the call a final time, he responded:

“Speak, for your servant is listening.”

And with those words, his life was never the same. How the boy heard and answered that call led to many significant events in Israel’s history, including the anointing of two kings, one who became the most famous the country would ever know. Samuel was called, and he answered.

But the scary part — the part we should pay attention to — is that he almost missed it.

The truth, I think, is that God is speaking. We just struggle to listen. And sometimes we mistakenly believe that calling is about listening. But what if it was more about learning to hear? What if God was already speaking, but we just weren’t in tune with His voice?

When we look at the call of Samuel, we see a similar process. It’s not just enough to listen. You have to put yourself in a posture to hear in the first place. And that choice is actually three choices:

1. Be still.
God’s call tends to not come in the midst of noise and chaos. It often arrives when we are quiet — late at night or early in the morning or maybe in the middle of the day. Or perhaps, those are just the times when we can hear.

2. Ask for help.
God’s call is not just personal. Moses had Aaron and Miriam. Jesus had the inner circle on the Mount of Transfiguration. It may come in private but it’s confirmed in community.

3. Say yes.
I know it sounds simplistic, but God will only push us so far when we say no. He is looking for us to invite Him deeper into our lives. Yes, He’s calling, but it’s up to you to respond.

That’s what I learned once I answered my call to be a writer. I realized in His own way, God had been calling me to this vocation my whole life. I just lacked the ability to discern the message. And the truth is it took a team of mentors and a discovery process, not a single epiphany, to finally figure out what I was meant to do.

Maybe the same will be true for you, too. 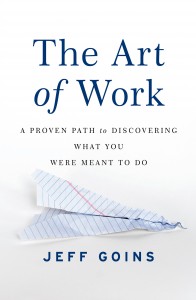 Jeff Goins is the author of four books including his latest, The Art of Work: A Proven Path to Discovering What You Were Meant to Do. Jeff’s new book will help you make sense of your life, understand how a calling works, and what the next step is. Find out more here.

Today, we’re giving away 10 copies of The Art of Work right here on the blog! Just leave a comment below with which of the 3 choices you’re going to focus on this week to listen for God’s voice. 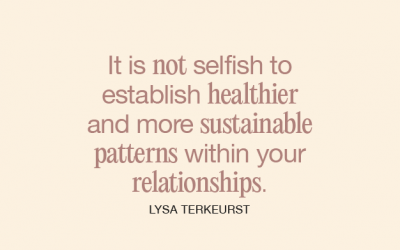 You Can Love Them but You Can’t Change Them

Do you have a relationship in your life where you know something is wrong, but you can’t figure out what to do? You’ve prayed about this behavior or situation. You’ve talked about this. You’ve tried to navigate it. You may have even tried to stop it. You've made... 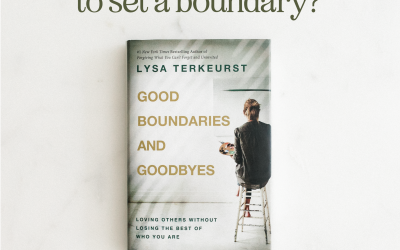 I’m Going to Answer Your Most Asked Questions … Join me on Facebook Live tomorrow!

Is it unloving or selfish to set a boundary? I've found myself asking this very same question.  Join me tomorrow on the Proverbs 31 Ministries Facebook page as I answer this question and more during a free live Q&A!  Don't miss this behind-the-scenes... 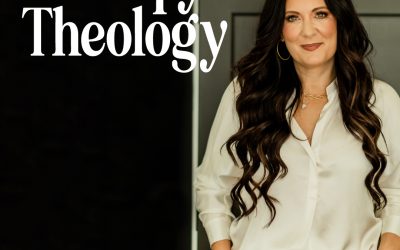 It’s challenging to be a dearly loved daughter of God and at the same time a poorly treated woman by another person.  I'm wondering if you can relate.  During the writing of my newest book, Good Boundaries and Goodbyes, I realized this on a very personal...