A “blue run” is what we tackled first.

This is how slopes are labeled by the ski officials. The officials whose job it is to inform skiiers exactly what they’re about to get into. Yes, those of us crazy enough to strap slick glorified popsicle sticks to our feet and careen down a mountain, need to be informed.

Green for beginners. Blue for intermediates. Black for the advanced and those who think they are advanced until they get too far to turn back. Bummer.

No, we would be smart with this skiing thing. We wouldn’t overestimate our abilities. We wouldn’t be tackling the black runs. But blue? Yes please.

So blue it was. The sky and the run. The perfect skiing adventure.

We’d been on several lovely runs down the same slope when it was suggested we try a different lift. Taking us to a different slope. Hunh? I am emotionally allergic to different. I like to discover something that’s good and stick with it. Why mess with what’s working? With what feels good?

“It will be great,” they insisted and headed on over to the new lift.

Either I was going to follow along or be left behind. That’s when I had my first not so nice thought. I call them cussing thoughts. It’s not that I was actually saying cuss words. No, more like really negative thoughts that I wouldn’t want to be broadcast out loud. You know what I mean?

A new slope it would be.

Things started out well. But then we hit this place that made the designers of said slope giggle when deciding just how to make this run interesting. Have you ever heard people say something like, “Everything was going fine until we hit a little bump in the road”? Yes, well, try a steep mountain full of nothing but bumps. Like the kind that could careen you off the side of the mountain. Or snap your legs in half.

As fear coursed through every fiber of my body, my mind filled up with all things negative and derogatory.

What’s so ironic is just an hour before I was helping my friend Laci learn to ski. She was terrified. I was confident.

“You can do this,” I assured. “Don’t look down the mountain, and think you can’t get through this. Look across the mountain. Just ski from side to side on the slopes and before you know it you’ll be safely at the bottom.”

I hadn’t really taught Laci how to ski. I’d taught her how to think. And when she got into the right mental mode, she learned to ski.

She had to resist the cussing thoughts so she could choose the corrected thoughts. Because dark thoughts are like a black run down the mountain. Once you get on the black slope of cussing thoughts they’ll take you down to places you don’t want to go.

Now it was my turn to apply my own advice. And I failed miserably. I made that run so much more difficult by letting the cussing thoughts come in and bring me down.

Every day we’re going to hit bumpy spots in life.

Someone will do something that rubs you wrong. Cussing thoughts or corrected thoughts?

A situation doesn’t go the way you hoped it would. Cussing thoughts or corrected thoughts?

You don’t get that opportunity you felt you deserved. Cussing thoughts or corrected thoughts?

A cussing thought can become a corrected thought by asking three questions:

* Is this thought in line with truth?

* Is this thought in line with who I am?

* Is this thought in line with who I want to be?

God has taught me how to think using His truth but I have to make the choice to apply what I’ve learned.

God has called me a child of God but I have to choose to live this legacy.

God has challenged me to grow in my knowledge of Him but I have to choose whether or not to display this growth through my actions. 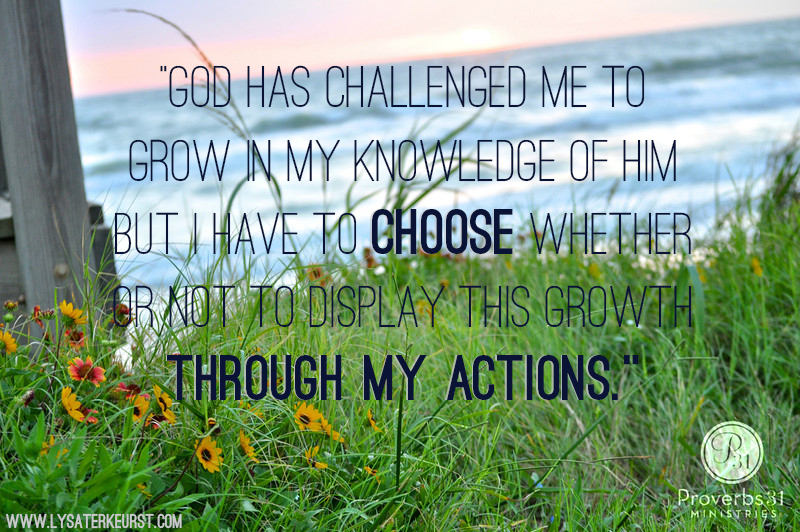 (We demolish arguments and every pretension that sets itself up against the knowledge of God, and we take captive every thought to make it obedient to Christ,” 2 Corinthians 10:5.)

P.S. Before I sign off… I’ve got some great news! On January 29th at 9pm EST I’ll be hosting a live, FREE Webcast with Women of Faith’s Sheila Walsh! We are so excited to be able to share with you a little more about what we’ve learned about these “cussing thoughts”. So mark those calendars, invite some friends over, and tune in, right here at www.lysaterkeurst.com – more details to come on how to sign up so check back soon!