Last week I was on a plane with 2 friends. We were talking in normal conversation tones, about my upcoming book “Unglued,” when suddenly the couple in front of us came unglued. On us. Joy.

The man turned around and said, “Can you guys just QUIET DOWN already?”

It wasn’t a gentle suggestion. It was a harsh command.

A little stunned, we simply replied, “Sure.”

And we did our best to finish our conversation in a volume slightly above a whisper. But that wasn’t working for this man or his wife who kept turning around giving us “the look.”

Finally, in as kind of a voice as I could muster up, I said, “Sir, we are really trying to be as quiet as possible but I’ve recently experienced trauma to my ear which caused hearing loss and while I want to respect your wishes, I’m having such a hard time hearing my friends…”

Before I could finish my sentence, his wife whipped her head around and snapped, “Well, we don’t have hearing loss and your constant talking has given me a migraine. So just HUSH, okay?”

My heart raced. My face turned red. And I thought of the perfect comeback to say.

Have you ever wanted to put your Christianity on a shelf and be as mean to someone as they are being to you? You know, just let loose and seriously break bad on somebody.

Maybe not, because you are nice. And most of the time, I am too. But in this moment I didn’t want to apply a single bit of my own “Unglued” advice. I won’t tell you what I wanted to say but I can assure you it didn’t involve being kind or gentle.

But this is the exact point where I had to make a choice.

A choice of who I wanted to partner with in this situation…God or Satan.

If I chose to go the route of anger, harsh comebacks, and retaliation, I would have basically stepped into Satan’s camp and caused conflict escalation.
If, however, I chose to go the route of gentleness and grace, I would be partnering with God and would continue to make progress with my raw emotions. Like Philippians 3:16 reminds me, “Only let us live up to what we’ve already attained.”

On my Unglued journey, I have already attained more gentleness, more grace, more peace. Why would I want to trade all that for a few minutes of retaliating words? Words that will only leave me with a big ol’ pile of regret.

Now I can’t promise I’ve progressed to the point where my initial thoughts about this couple were nice. They weren’t. But, I made my mind think about the reality that people that on edge must have a lot of stored up misery. Their reaction probably had a lot less to do with me and a lot more to do with another situation going on in their lives. And my job wasn’t to fix them or set them straight or prove how wrong they were acting.

My job in that moment was to keep everything in perspective. And simply give a gentle answer that could turn away their wrath.

Because honestly, while it felt hugely offensive when it was happening, this wasn’t huge. This wasn’t some sort of major injustice in my life. This was just a minor inconvenience. Why would I want to trade the peace of partnering with God for a few cheap moments of putting someone else in their place? 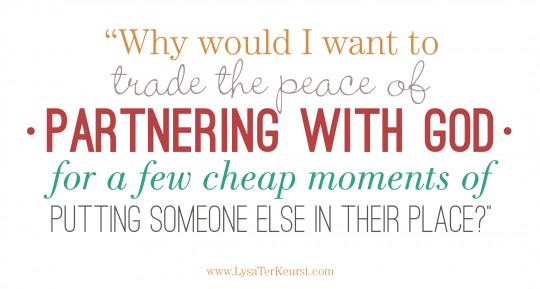 And honestly, if this was the worst thing that happened to me that day, it was still a pretty good day.

But I will tell you, I grabbed an extra pair of ear plugs yesterday and stuck them in my purse in case I run into someone else who accuses me of being too loud. A girl has to be practical you know. 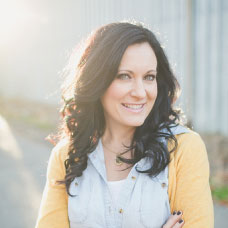